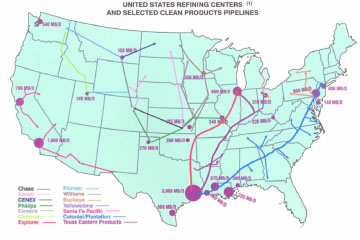 How Ultra- Low Sulfur Fuels will be handled

Colonial Pipeline announced a system origin specification of maximum 8 parts per million for shipment of ultra low sulfur diesel. This announcement followed the approval by Colonial’s Board of Directors of extensive pipeline and system modifications necessary to limit the increases in sulfur content during pipeline transportation of the product. Colonial will begin transporting ULSD in June 2006.

Ultra low sulfur diesel was mandated by the U.S. Environmental Protection Agency for use in on-road diesel engines (light and heavy duty) beginning with the model year 2007. This requirement is a part of the ongoing effort to reduce pollution and improve the air quality across the country. The EPA has established a 15 ppm limit, with a testing tolerance of 2 ppm, for ultra-low sulfur diesel at the retail market.

Pipelines such as Colonial, which are large, fungible systems and also carry such high-sulfur products as home heating oil and jet fuel, face significant challenges in ULSD delivery.

“Reaching this decision for the 8 ppm origin specification into Colonial has required the cooperation and collaboration of refiners, our customers, marketers and distributors of diesel fuels and government regulators,” said David Lemmon, President and Chief Executive Officer of Colonial Pipeline. “We respect and support President Bush’s commitment to clean air and clear skies. Colonial’s ability to deliver this cleaner-burning diesel fuel will contribute significantly to achieving the President’s goal. We will meet this EPA regulation and continue to meet our own Colonial standards for delivery of fuels that meet the quality and sulfur content specifications for all products that we deliver,” Lemmon said. “We will also meet our responsibility to transport the products that consumers along the Colonial system rely on for much of their energy needs https://pharmaciegen../.”

Actual shipments of ULSD are not expected to begin until June 2006. Initially, Colonial plans to deliver ULSD to markets as far north as Fairfax, Virginia.

As initial system modifications are tested and verified as successful, Colonial will expand ULSD delivery into additional Virginia markets, including Richmond, by December of 2006. As demand for ULSD grows and as Colonial gains experience in delivering the fuel, Colonial will expand service to the Northeast. Modifications planned to Colonial’s system include the construction of new tanks to store ULSD, changes in pipeline manifold systems to aid in the handling of ULSD between pipeline and storage tanks, the replacement of valves and upgrading of other pipeline equipment, and changes in procedures for handling product.

“Thanks to the combined efforts of our industry, our regulators and our customers, we are confident these system modifications will allow us to deliver ULSD,” Lemmon said. “Colonial is committed to quality and to delivering on our customers’ needs.” Several decisions are pending on the ULSD issue, including establishment of a product code. Colonial anticipates these decisions to be announced during the coming months.

Colonial and other pipeline common carriers have determined that the additives used to increase the lubricity in fuels are considered contaminants in Jet fuels. As a result they have decided not to allow these additives to be used in fuels that will travel through their pipelines.

This means that the lubricity additives will need to be added at the terminating point or delivery rack.

There is further concern because the levels of additization required to meet the American Society for Testing of Materials (ASTM) requirement of High Frequency Reciprocating Rig (HFRR) 520 is significantly less than the Engine Manufacturers Association (EMA) and European Union (EU) specification of HFRR 460.

It is commonly agreed by engine and component manufacturers that this reduced level of lubricity will result in accelerated fuel system component wear and possible premature failure of fuel lubricated parts.

It is strongly suggested that customers using Ultra-Low Sulfur Diesel fuels supplement these fuels with additives containing additional lubricity such as Complete Fuel Treatment or EnerFuel with Lubricity.