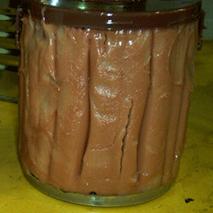 Welcome to February 5th 2007, the first real winter weather with the “new” Ultra Low Sulfur Diesel (ULSD). After being told by refiners and many distributors that ULSD would be the “be all, end all” magic problem solver for all diesel engines, this is what really happened when it finally got cold and stayed cold for 48+ hours.

The red colored filter on the left is the result of a distributor using so much anti-gel additive that it actually saturated the fuel to the point of completely plugging THOUSANDS of fuel filters over several days.

The filter on the right shows paraffin wax plugging it. This customer used ULSD #1 (ULSD Kerosene) to “cut” the ULSD #2 fuel. However the “new” ULSD #1 doesn’t work the same way as the “old” LSD Kerosene (see more below)

When treating with a cold flow improver (anti-gel), using the recommended treatment ratio provides a certain level of protection, using twice the recommended ratio may improve the gel point a little, however if you go beyond that level it will actually raise or worsen the gel-point. At treatment levels beyond 3-4 times the recommended ratio, you will begin to saturate the fuel and can actually plug a filter full of anti-gel additive. This is generally indicated by a reddish or pink colored wax-like substance covering the filter as much as 1/4″ thick. This wax-like substance will not readily melt at room temperature unlike paraffin wax that melts above 32?F.

In the past the general “Rule of Thumb” regarding using Kerosene (#1D) to “cut” #2 diesel was that for every 10% kerosene added to #2 diesel you would lower the Cold Filter Plug Point (CFPP) by approximately 5°F. So for example a 50%-50% blend of #2D and Kerosene would have lowered CFPP by approximately 25°F. The “new” ULSD #1 is far less aromatic and has much less solvency than did the old Kerosene. As a result the new ULSD #1 will only lower CFPP by 2°F-3°F. This means that a 50%-50% blend will only lower CFPP by 10°F to maybe 15°F.

Using Enertech Labs Complete Fuel Treatment with straight (untreated) #2 ULSD will prevent problems like this from happening in the future.